The Gulf of Orosei is situated on the eastern coast of Sardinia, between the Punta Nera (North) and the Capo Monte Santu (south). 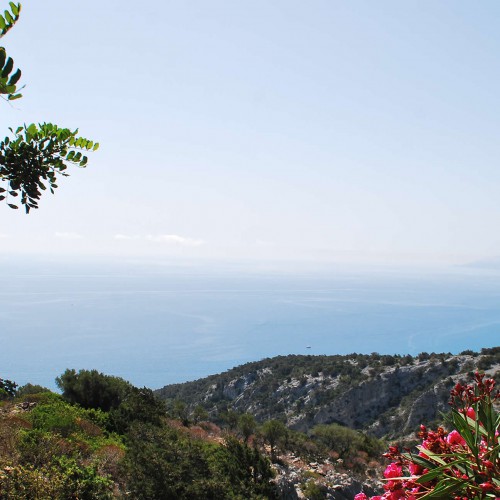 The southern part of this area, where Cala Gonone is placed, is characterized by a chain of calcareous mountain covered by the typical mediterranean scrub.
Behind Cala Gonone, Mount Irveri protects the village from the north.
This mountain joins Mount Bardia and Mount Tului creating a wide natural amphitheatre, where Cala Gonone lies.
The three mountains contributed to isolate the sea-side from the inland and made it unreachable for centuries.
The total lack of urban settlements and coastal roads makes this strech of coast one of the most interesting ones from a natural point of view.

The Supramonte is not less interesting with its evocative Natural Monuments such as the Gorroppu Gorge, one of the highest and widest canyon in Europe, the mysterious nuragic village of Tiscali, and Doinanicoro, a limestone plateau of 3 sq. km at 900 above the level of sea.
This mountain area is considered a temple of the Sardinian flora and fauna from the lovers of the excursions.
The mild climate all year round makes Dorgali’s territory the ideal place for the nature sport enthusiasts.